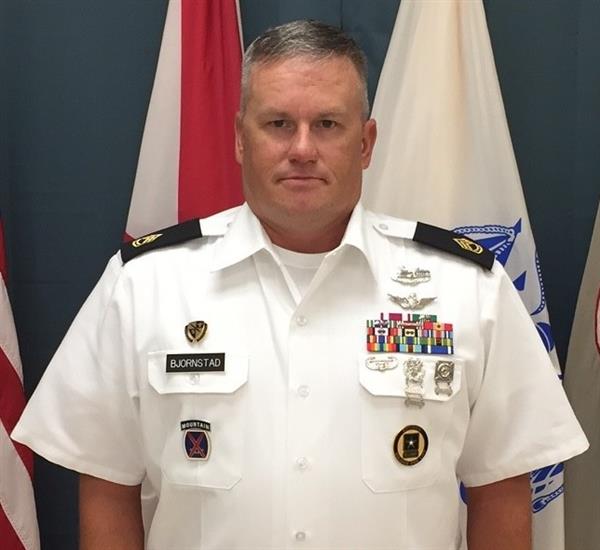 Sergeant First Class Bjornstad joined the Army in 1991 as an Aircraft Structural Repairer. He attended Basic Training in Fort Jackson, SC and then completed Advanced Individual Training at Fort Eustis, VA. He was then assigned to Combat Aviation Training Brigade (CATB) Fort Hood, Texas, in 1992.

He was further assigned to 1-229th Attack Helicopter Battalion and conducting extension training, the whole unit was relocated to Fort Bragg, North Carolina. During his time with the 229th, he worked on UH-60 Blackhawks, AH-64 Apaches and OH-58A/C Kiowa, while working as an Aircraft Structural Repairer.

In 1995, he was transferred to Fort Campbell, Kentucky where he was assigned to Delta Troop, 2/17th Air Cavalry. He was continued to work as an Aircraft Structural Repairer on aircraft such as the Vietnam era AH-1 Cobra and OH-58 Kiowa. The unit went through a transition to the new OH-58D Kiowa Warrior aircraft where he became the Noncommissioned Officer In Charge (NCOIC) of his section.

Now SGT Bjornstad, was transferred overseas to Germany, in 1998, to Giebelstadt Army Airfield, outside of Wurzburg Germany. He was assigned to Bravo Company, 7-159th Aviation Battalion, an intermediate maintenance support unit. The unit supported units from the 12th Aviation Brigade, flying UH-60A/L and CH-47D Chinooks. While assigned there, he had assignments such as Supply Sergeant, Sling Load Inspector Certification Course Instructor and later NCOIC of the same course. He was also promoted to Staff Sergeant. He continued to support the Brigade’s needs during a deployment to Iraq in 2003.

After deploying his unit to Iraq, assisting in the setting up of Balad Airfield for combat operations, he reassigned to the Republic of Korea.

In 2005, now Staff Sergeant Bjornstad was assigned to a training unit at Fort Benning, Georgia. While assigned to the 11th Regiment, he trained officers having recently graduated from the Academies, ROTC and OCS, getting them ready for the next level of training.

Transferred next to Fort Drum, New York, assigned to Delta Company, 2-10th Assault Helicopter Battalion, flying UH-60L Blackhawk helicopters. He was assigned to work in the Production Control office, in charge of maintenance for the Battalion. He was deployed, shortly after arriving on station, to Iraq where his unit performed numerous assault and support missions. With a redeployment back to Fort Drum, he and his unit was designated to deploy to Forward Operating Base (FOB) Shank, Afghanistan in 2011. While deployed, he was promoted to Sergeant First Class.

With the redeployment and a short stay, SFC Bjornstad and his unit were deploy again to FOB Shank, Afghanistan. He was assigned as the NCOIC of the Production Control office, overseeing the maintenance program for over 69 aircraft of varying types. These aircraft included: UH-60M, the most advanced Blackhawks in the Army inventory, CH-47F, the most advanced Chinooks, AH-64D Apaches, and the Reaper UAV. Upon redeployment back to Fort Drum in 2013, SFC Bjornstad prepared for the final transfer and reassignment to retirement after over 23 years in the military.

SFC Bjornstad has been married for over 28 years to Joan, and has two children. Their son (26yrs) has autism and lives at home with them. Their daughter (23yrs) is attending college at Florida Southern College in Lakeland, Florida.

SFC Bjornstad has made is home in Ocala, Florida. He enjoys hobbies like motorcycle riding, traveling, sightseeing, history, running and hiking.

This year, he is beginning with 4th year as a JROTC Instructor all at West Port High School.