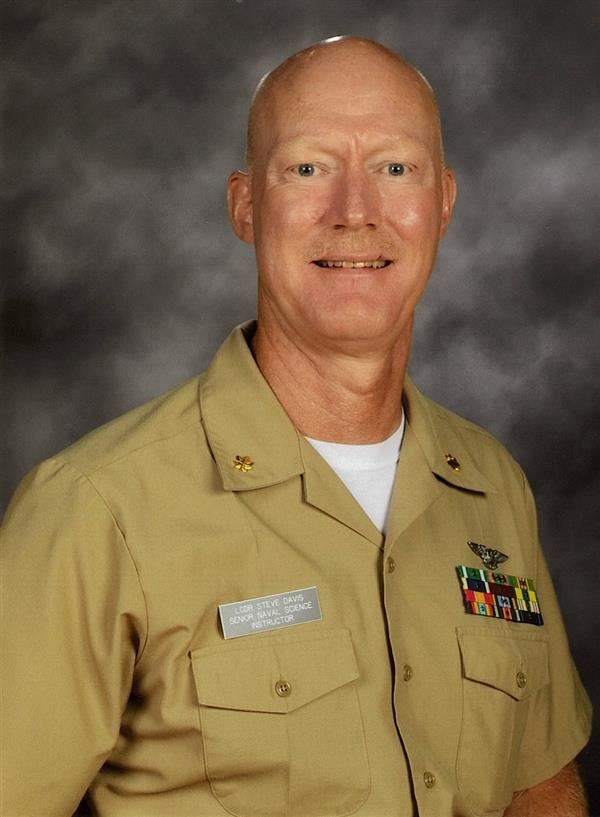 Lieutenant Commander Davis enlisted in the Navy in 1977 and went to Recruit Training Center Great Lakes for initial training. From there he went to Meridian, Mississippi for Aviation Administrationman A school.

His first duty station was with Attack Squadron Ninety Three (VA-93) from April 1978 until April 1980. VA-93 was assigned to Carrier Air Wing 5 and deployed on the USS Midway (CV-41) which was home-ported in Yokosuka, Japan.

He continued his career with Helicopter Anti-Submarine Squadron Twelve (HS-12) in San Diego, California and deployed on the USS America (CV-66) in 1981.

Ready for shore duty, he was assigned to the Commander, Naval Air Forces, U.S. Pacific Fleet staff in San Diego. During this tour, he advanced to Petty Officer First Class and was selected as the Staff Sailor of the Year in 1983.

Requesting to return to sea duty in 1984, he transferred to Helicopter Anti-Submarine Squadron Fourteen (HS-14) in San Diego and deployed on the USS Ranger (CV-61). During this tour he was advanced to Chief Petty Officer in September of 1986 and then commissioned as an Ensign in October 1987.

His first assignment as an Aviation Maintenance Limited Duty Officer took him back to Japan with the USS Midway (CV-41) in the Aircraft Intermediate Maintenance Department from January 1988 to December 1989.

In January 1990 he returned to shore duty in San Diego with Helicopter Anti-Submarine Squadron Light Forty One (HSL-41). During this tour he was promoted to Lieutenant.

Returning to sea duty in January 1993, he once again returned to Japan with HS-12 aboard the USS Independence (CV-62) which was the current aircraft carrier home-ported in Yokosuka, Japan. After decommissioning HS-12 in October 1994, he transferred to Helicopter Mine-Counter Measures Squadron Fourteen (HM-14) in Norfolk, Virginia. During this tour he was promoted to Lieutenant Commander.

Returning to shore duty in October 1997, he was assigned as the Assistant Officer in Charge of the Naval Aviation Maintenance Training Group Detachment in Norfolk, Virginia. After a little over 22 years of service, he elected to retire from active duty in April 2000.

After moving his family to Ocala, Florida, he worked for a year as a Production Supervisor at E-One and then 3 years investigating child abuse cases with the Department of Children and Families.